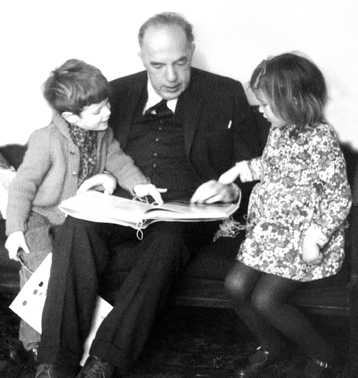 When Gombrich died in 2001 it was widely assumed that there would be a memorial volume, and several were mooted. This essay was requested by the College Art Association for their website; it was intended to collect responses that would form the basis of conferences or publications. Those plans were suspended by the events of 9/11.

Since then there have been several conferences and a number of papers, but Gombrich’s relation to the discipline remains unsettled: he is at once widely cited and seldom emulated, as if he were somehow necessary to the discipline’s sense of itself, but also separate from it. (He is not the only scholar in such a position: art history depends for its sense of itself on a dozen or so writers who are accorded differently marginal or ambiguous positions. Derrida, Lacan, Barthes, and Warburg are others.) There are ten claims in this text, one of which is just the observation that Gombrich himself did not count himself as an art historian.

Top photo: Gombrich’s Story of Art was, as he often insisted, written for children: yet it remains the world’s best-selling introduction to art for adults. Its companion,  Little History of the World, is little read by art historians: it’s an old-fashioned chronicle of kings and wars, entirely unlike its companion. Story of Art remains the best succinct telling of the European march of naturalism, from its fitful beginnings in Egypt and archaic Greek art to its problematic partial eclipse in modernism. The book is relentlessly and consistently “Eurocentric” and precritical, and its narrative provides what sense there is in the enormous doorstop North American world art history textbooks. My own response to Story of Art is the book Stories of Art, sadly written one year too late for Gombrich to see it.

Bottom photo: like many people, I corresponded with Gombrich (he was a very patient letter writer), but I only met him once, at his home at 19 Briardale Gardens in London, where the photo below was taken. His house was notoriously inconvenient for public transport, as if he’d chosen a place ideally distant from all possible tube stops.

The essay was revised for publication in a volume by Jan Bakoš, Relativism versus Universalism in the Age of Globalisation and Ernst Hans Gombrich: On the Occasion of the Hundredth Anniversary of E.H.Gombrich’s Birth, and afterward published as “Ten Reasons Why E.H. Gombrich is Not Connected to Art History,” Human Affairs [Bratislava] 19 no. 3 (2009). There is an Italian translation, “Le ragioni per cui Ernst H. Gombrich non può essere considerato uno storico dell’Arte,” Estetica, 2010.