Chapter 4, “How To Count in Oil and Stone”

Chapter 6, “The Studio as a Kind of Psychosis” 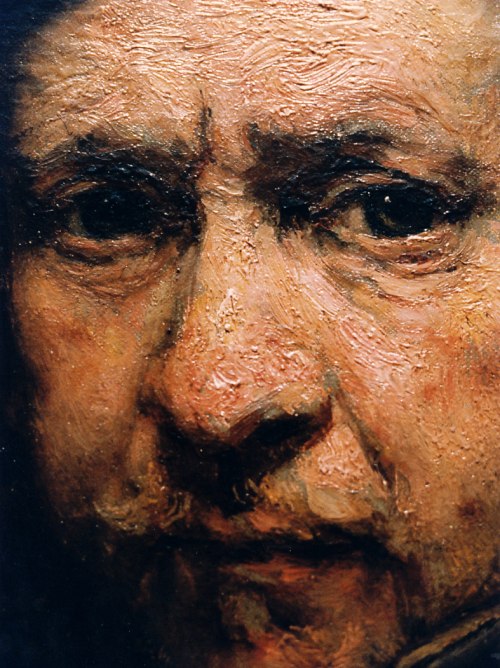 This is not a book about paintings, but about the act of painting, and the kinds of thought that are taken to be embedded in paint itself. It is about the hypnotic attraction of oil and tempera: why painters love paint, even before the painting is half-finished.

Paint records the most delicate gesture and the most tense. It tells whether the painter sat, stood, or crouched in front of the canvas. Paint is a cast made of the painter’s movements, a portrait of the painter’s body and thoughts. The muddy moods of oil paints are the painter’s muddy humors, and its brilliant transformations are the painter’s unexpected discoveries. Painting is an unspoken and largely uncognized dialogue, where paint speaks silently in masses and colors and the artist responds in moods. All those meanings are intact in the paintings that hang in museums: they preserve the memory of the tired bodies that made them, the quick jabs, the exhausted truces, the careful nourishing gestures. Painters can sense those motions in the paint even before they notice what the paintings are about. Paint is water and stone, and it is also liquid thought. That is an essential fact that art history misses, and alchemical ideas can demonstrate how it can happen.

Art historians tend to see Rembrandt’s method as an attempt at naturalism, but it goes farther than portrait conventions have ever gone, then or since. Consider what is happening in the paint, aside from the fact that it is supposed to be skin. Paint is a viscous substance, already kin to sweat and fat, and here it represents itself: skin as paint or paint as skin, either way. It’s a self-portrait of the painter, but it is also a self-portrait of paint. The oils are out in force, like the uliginous oozing waters of a swamp bottom. The paint is oily, greasy, and waxy all at once — even though modern chemistry would say that is impossible. It sticks: it is tacky and viscid like flypaper. It has the pull and suction of pine sap. Over the far cheek, it spreads like the mucilage schoolchildren use to glue paper, resisting and rolling back. On the nose — it’s rude, but appropriate — the paint is semi–solid, as if the nose were smeared with phlegm or mucus. On the forehead, it looks curdled, like gelatin that is broken up with a spoon as it is about to set. There is drier paint around the eyes, and the bags under the eyes are inspissated hunks of paint, troweled over thin, greyish underpainting. The grey, which is left naked at the corner of the eye and in the folds between the bags, is the imprimatura, and the skin over it is heavy, thick, and clammy. The same technique served for the wings of the nose, where dribbles of paint come down to meet the nostril but stop short, leaving a gap where the grey shows through. Of course the nostril is not a hole, but a plug of Burnt Sienna with Lamp Black, and it also lies on top of the grey imprimatura. Rembrandt’s thin mustache is painted with wiggles of buttery paint, almost like milk clinging to a real mustache.

The warm sky descends onto the horizon, and the cool sea rises up toward it. They do not meet in a line but in a blur, and they cross and overlap.

(This is Alessandro Magnasco’s Christ in the Sea of Galilee, in the National Gallery, Washington, but in the book I don’t always identify paintings right away. It’s a good exercise to just look, and observe the paint together with your own assumptions about what it’s doing.)

There is some blue–green underneath the rose paint of the sky, and also blue-green over the sky color: at the left, closer to the horizon, are five or six hairstreaks of blue lying on the rose. In the ocean, the two basic tones are much more tangled, and sky colors come flooding down over the roughened horizon, as if the air could dilute the ocean, or the ocean could evaporate into the sky.

Near the center of this detail, there are two very thick, short horizontal strokes, one a fingerbreadth above the other: the upper one is rose, and the lower one blue.

Even at the bottom where the darkness is swallowing the light, Magnasco has put faint swirls of sky-color into the wet ocean-color. When painters work this way, they may have two brushes in their painting hand at once, one for each color.

Anyone who doubts that the methods of oil painting have been lost needs only look closely at a pre–modern painting. This a portion of Titian’s Venus with a Mirror. (It’s a navel and an elbow.)

Some time between the sixteenth and the eighteenth century the painting may have been exposed to water, or dropped, and paint chips fell off, leaving holes in the lower arm and the side. An inept restorer tried to match the color and fill in the holes, but he used impermanent pigments and they faded to the color of browned butter: and worse, he used a slow–drying medium (perhaps an oil other than linseed oil), so that the paint ran out of the holes before it dried. The result looks like nothing so much as suppurating wounds — not a very flattering condition for Venus. It may have been the same restorer who though he could improve Titian’sense of harmony by adding patches of light brown glaze: one is visible here on the front of the elbow, and there are others scattered across her body like big pale birthmarks. To think about Titian’s technique, it it necessary to ignore those blemishes as much as possible. What, then, can we deduce about his method? It began with a pale brown imprimatura in an earth tone, the equivalent of modern Raw Sienna. That tone is unmistakable in the navel, between the pit of the navel and the shadow to its right, and again on the elbow, just right of the shadow at the ulna. Those two places are very thin, and they take their brightness from the white canvas size just beneath them. That much is clear enough. But then what? The brightest portions of the belly are pastose paint, very thick, and it is typical for Titian to reserve his densest paint for flesh tones.

In Heinrich Khunrath’s Amphitheater of Eternal Wisdom, one of the most elaborate alchemical texts ever printed, Jesus stands in splendor at the center of concentric rings of symbols and Hebrew texts.

This is one of the rarest of all alchemical books, and in this copy in Madison, Wisconsin — it is one of two in the world — the illustrations have been painted with gold and silver. This is the center of an oversize page that is dense with texts and symbols. I was one of the last to see this, because it is fragile and precious, and it has now been replaced, for visitors, by a color facsimile. The librarian left me alone with the book for a few minutes, and I took advantage of it to take some photographs in shallow focus, holding my camera close to the page.

The silver has darkened to black, but the gold is still brilliant, and the plates glow and shimmer with unearthly light. Here Jesus is nude, like the unfinished hermaphrodites and homunculi, and he stands in a fiery aureole, on a flaming phoenix, the alchemical symbol of resurrection. Around him, outside of this detail, are the signs of his divinity: sentences in Latin, proclaiming him the Son of God, and his holy names in Hebrew.

Khunrath’s books are daring mixtures of Christian and alchemical thinking, dangerously close to the ground of heresy.

(Exerpts from different parts of the book.)