See the Webexhibits version of the talk, part one and part two. 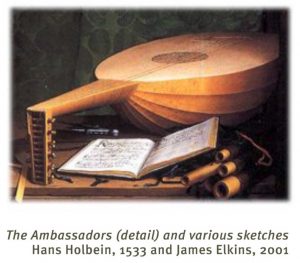 I am unconvinced by most of Hockney’s theories, and amazed at the interest they generated in the media. The popular press reaction was overwhelmingly positive: it almost seemed as if it was a relief for some people to discover the “secret” (the word is in the title of Hockney’s book) of the Old Masters, which would relieve viewers of the need to study the art. The event at NYU in 2001 attracted enormous media attention: 90 seats were set aside for journalists, and there were two overflow rooms with video feeds. Susan Sontag rescued Leo Steinberg from the line to get in, which snakwed halway across Washington Square. The conference, and Hockney’s book, were mainly preoccupied with arguments about the specifics of Hockney’s claims. That kind of technical interest has long been marginal to the study of the wider cultural meanings of artworks. The entire event and reactions were tremendously depressing. 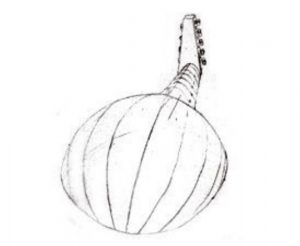 These are screenshots from the essay given at the Hockney conference, as it was posted on Webexhibits in 2009. In the lecture, I showed a detail from Holbein’s French Ambassadors, and several drawings I had made, from imagination, of the lute in that painting, showing how it owuld look from different viewpoints. The idea was to demonstrate that no special skill, and certainly no particular knowledge or optics, are needed to draw the kinds of objects Hockney claimed required optical aids. One of the difficulties with Hockney’s way of thinking is that it assumes artists need help to make certain kinds of naturalistic pictures.

Unfortunately the original drawings, which were very detailed, are lost. 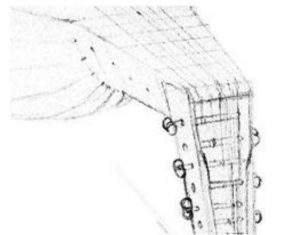 There are three papers involved:

1. The published essay is a brief review of the conference held at NYU.  It was published in Circa 99 (spring 2002): 38.
2. A version of the paper I gave at that conference was posted online (here in two parts).
3. There is also formal review of Hockney and Falco’s Secret Knowledge (New York: Viking, 2001), on the College Art Association review site.

(These three texts comprise all I have to say on the subject. Inquiries about perspective and painting may not be answered.)