These days I am concentrating on a work in progress—an experimental novel with images. It’s long and complex: it has images, footnotes, graphs and charts. It’s in four freestanding volumes. Volume 2, A Short Introduction to Anneliese, and vol. 3, Weak In Comparison to Dreams, are complete. You can read the opening pages of an early draft here.

I have been working on the novel, on more or less, since 2010. I hope to try to publish volume 2 around 2025. The idea is to finish the book with no excuses or regrets: after that amount of time, whatever it is, it’ll be the best I can do. There are some statistics about it in the embedded page, below.

I’m prompted to do this for two reasons. The first is that art history and related fields in the humanities have long acknowledged the fundamental position occupied by writing, which entails among other things that writing is not a neutral medium, and that there is no secure distinction between nonfiction and other kinds of writing—but few scholars have taken writing seriously in their own practice. Art historians, theorists, and critics continue to write along well-defined disciplinary paths. We cite poststructural philosophers on the idea of writing, but our own writing conforms to disciplinary expectations. The few authors who permit their writing to become more experimental (such as Barthes, Derrida, John Berger, or Hélène Cixous) tend to have their texts viewed as fiction or as sources for art history, rather than examples of art history.

One result of this is a deep disparity between the ways writing is taught and interpreted inside and outside art history. Art history, visual studies, and related fields have virtually no discourse on what might make writing interesting or challenging: we mainly praise writers who are clear, or remark on those who aren’t. Meanwhile, just outside our disciplines, in literary history and criticism, there is rich literature on writing with a complex history and an enormous repertoire of strategies for reading texts. Within art history, it is as if none of that ever happened. Most of what is written under the name art history is not compelling, on account of a lack of reflection about writing itself.

What does art historical writing actually express, aside from its subject matter? For me, the average professional essay expresses the scholar’s anxiety about being correct, professional, and authoritative. The scholar’s preoccupation with status provides much of the affective content of an average text. I find that once you start paying attention in this way, it can be difficult to read past art history’s emotionally narrow tone, its brittle tension and affective fragility, to hear what might be expressed about the art.

The second reason for this project is that I would like to see how well I might be able to write when I am no longer concerned about disciplinary expectations or constraints.

I’m developing two books to teach experimental writing on art, which I use in seminars at the School of the Art Institute in Chicago. One looks back toward art history, and the other out at writing in general. The first is a critique of the writing in art history, intended for art historians; the second is meant as an aid to writers, including myself, who write fiction that includes images.

The first is “What is Interesting Writing in Art History?.” It begins with an account of how I arrived at a place where writing counts more than content, and there’s also a kind of manifesto of the importance of writing. On the same website is a discussion of what might count as interesting writing in art history, and close readings of experimental art historical writing by Alex Nemerov, Rosalind Krauss, T.J. Clark, and others, as well as writing that is not usually counted as art history, but is thought to be of potential use for art history (Derrida, Schefer, Cixous, and others). The project ends with a chapter on the theory of the essay, and another listing the institutions that teach experimental writing on art. The purpose of this first project is to help open the way to writing in art history that is informed by literary theory, and hence, I hope, more difficult, more responsive, more eloquent and flexible, and perhaps more expressive. 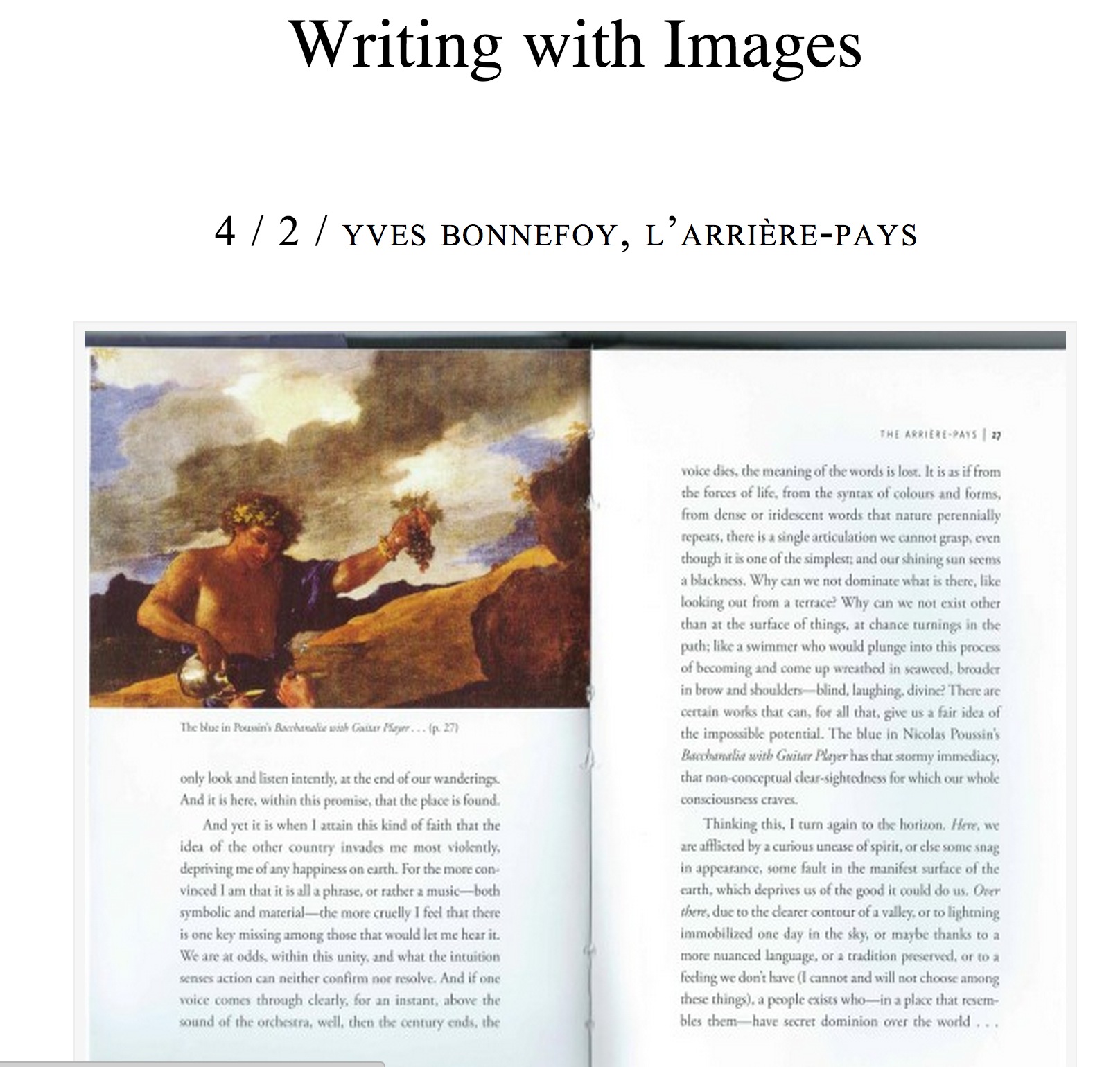 The second book is called “Writing with Images.” It is concerned with writing (including fiction) that contains images (of any sort, usually photographs). I think of this as the general field that contains art history as a special case. This second project includes a look at books that use formatting, design, and typography in addition to images (such as artist’s books); and there are close readings of texts that experiment with images, including Sebald, Anne Carson, Susan Howe, André Breton, Raymond Roussel, and others. The project includes an attempt at theory, in which I try to enumerate the different ways that images work in relation to texts, from merely illustrating what’s written (as in much art history) to opening unpredictable dialogues with the writing (as in Sebald). The purposes of this second project are to sketch a history of such practices, to theorize ways fiction and photographs have interacted, to expose some of the narrowness of art historical practices by contrast, and to provide material for writers at work on such texts. The project ends with a practical chapter, aimed at writers, which lists ways images can be used together with experimental writing.

Here is my writing schedule.