This is a series of five large volumes, each involving over fifty scholars. Each book has a separate page on this site. Links below go to pages on this site for more information. 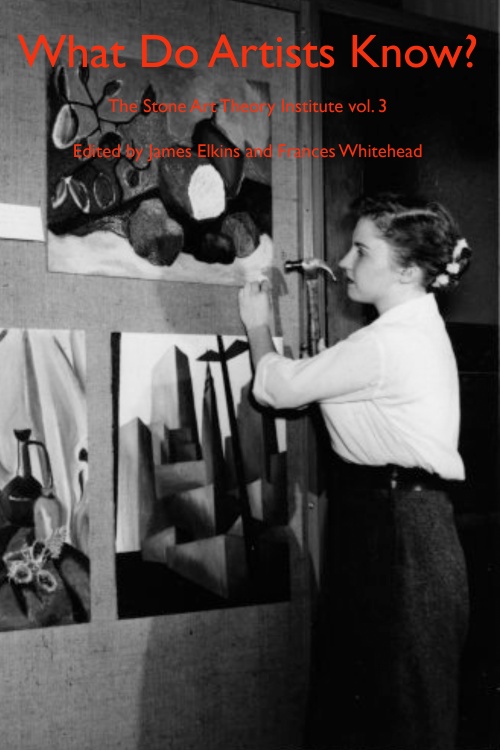 Each book in this series started as a week-long event, held in Chicago. No papers were given (except as evening lectures, which are not recorded in these books). For a week, 5 faculty and a group of 25 scholars met in closed seminars. In preparation for the week they had read over 800 pages of assigned texts. The week opened with a 3 hour panel discussion among the faculty, continued with 4 1/2 days of seminars (6 hours each day), and ended with a 5 hour panel discussion, open to the public. All 35 hours of it was taped and edited, and the pertinent portions presented here.

The series is a refinement of a previous book series called The Art Seminar, which appeared from 2005 to 2008. Like The Art Seminar, the Stone Art Theory Institutes are an attempt to record a new kind of art theory, one that is more inclusive and less coherent than some art theory produced in North America and western Europe since the advent of poststructuralism. The guiding idea is that theorizing on visual art has become increasingly formalized and narrow, even as art practices have become wildly diverse. Both book series are meant to capture a reasonable cross-section of thinking on a given topic, and both include people at the far ends of the spectrum of their subjects—so far from one another that in some cases they were reluctant even to sit together in the events, or participate in the books. Some conversations are genuinely dialectic, others are abrupt encounters, and still others are unaccountable misunderstandings. All those species of communication are recorded as faithfully as possible, because they are evidence of the state of understanding of each field.

The Introductions to each volume are meant as straightforward and clear reviews of the critical situation leading up to the seminars. There are no essays in this series, because it is not possible to usefully condense the hundreds of pages of texts that informed these discussions. (References to most of those readings can be found in the transcripts.) The omission of essays makes this series more “difficult” than The Art Seminar, but the literature of art theory has grown beyond the point where it can be helpfully anthologized. The books in this series are not introductions to the various subjects they treat, but attempts to move forward given the current state of discourse in each field. In that they follow the lead of the sciences, where more advanced textbooks necessarily presuppose more introductory material.

After each year’s week-long event, the editors selected excerpts from the thirty-five hours of audio tapes, and produced a rough-edited transcript. It was given to each of the participants, who were invited to edit their contributions and add references. After several rounds of editing the transcript was sent out to people who did not attend the event. They were asked to write assessments, which appear here in the order they were received. The writers were asked to consider the conversation from a distance, noting its strengths and its blind spots, in any style and at any length. As the assessments came in, they were distributed to people who hadn’t yet completed theirs, so that later assessments could comment on earlier ones, building an intermittent conversation through the book. The Afterwords are intended principally to organize the ideas in the book, so they can resonate with future discussions.

One of the central concerns of this series is making talk about art more difficult. For some readers, art theory may seem too abstruse and technical, but at heart it has a different problem: it is too easy. Both the intricate art theory practiced in academies, and the nearly invisible theory that suffuses galleries and art fairs, are reasonably easy to do reasonably well. As Wittgenstein knew, the hardest problems are the ones that are right in front of us: picture, visual art, realism. The purpose of the books in this series is to do some damage to our sense that we understand words like those.